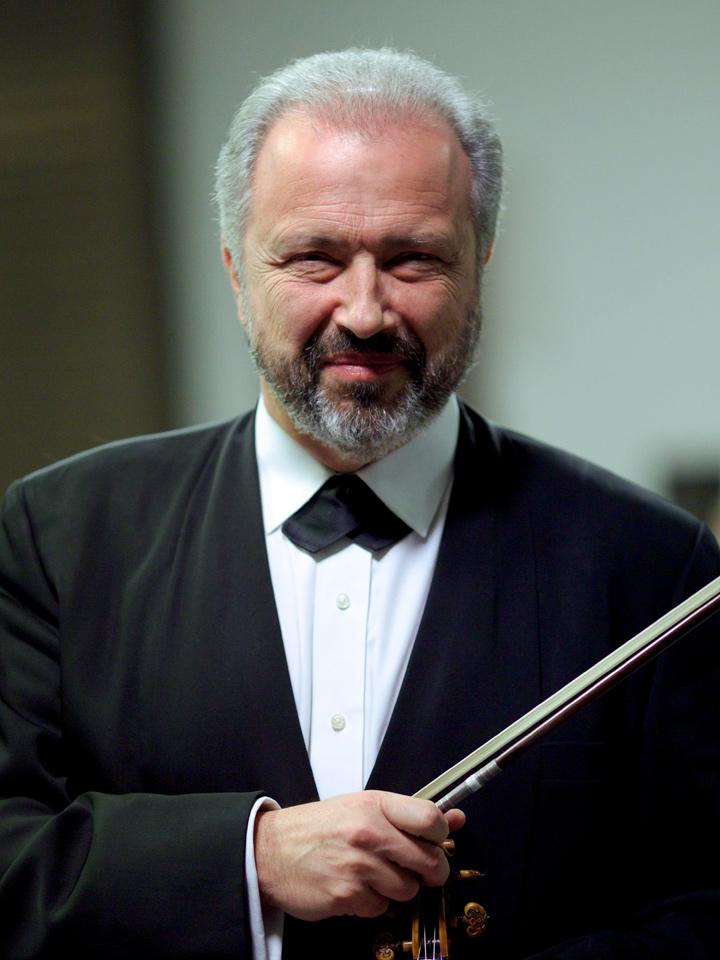 Dmitry Sitkovetsky is an artist whose creativity defies categorising. He has built up an active and successful career as a violinist, conductor, arranger,  festival director & also a TV presenter. Sitkovetsky has performed as a soloist with a number of the world’s leading orchestras including the Berlin, New York and LA Philharmonic Orchestras, Leipzig Gewandhaus, Concertgebouw Orchestra, all of the major London orchestras, NHK, Chicago, Philadelphia and Cleveland orchestras. He has performed at a number of high-profile festivals including Salzburg, Lucerne, Edinburgh, Verbier, Enescu (Bucharest), Ravinia, Hollywood Bowl, Mostly Mozart and Festival del Sole (Napa Valley). In 2003, he was appointed Music Director of the Greensboro Symphony Orchestra, a position he currently holds with great success. In the 2014-15 season and beyond, Sitkovetsky’s guest engagements represent his extremely diverse range of activities including concerto performances in Lucerne with the Südwestdeutsche Philharmonie (Tchaikovsky) and the Symphony of Napa Valley under the baton of Sir Neville Marriner (Mozart); play/conduct programs with the SPHINX orchestra at the Festival del Sole (Napa Valley) as well as with the Bangkok Symphony (Mozart); return engagements with the Japan Century Orchestra – (Bach, Mendelssohn, Beethoven), Moscow Virtuosi (Mozart, Tchaikovsky), Tallin Chamber Orchestra (Dohnanyi, Britten), Slovakian Philarmonic of Bratislava (Beethoven, Rachmaninov), Slovenian Philarmonic of Ljubljana (Adams, Corigliano, Rachmaninov) and will have Peter Coyote as a narrator in Copland’ Lincoln Portrait & Britten’s Young Person’s Guide to the orchestra in Napa Valley as well.   Last season’s highlights included a return appearance at the Enescu Festival in Bucharest with the Royal Philharmonic Orchestra (Enescu Caprice Romaine), at the Teatro Comunale di Bologna (Beethoven); chamber music concerts at the Concertgebouw in Amsterdam and at the Chamber Music Society of Lincoln Center in Alice Tully Hall (Bach); play/direct engagements with the New Jersey Symphony Orchestra and the Moscow Soloists with Yuri Bashmet in the Pushkin Museum in Moscow (Bach & Part). Sitkovetsky has built a flourishing career as a conductor. From 1996–2001, he was Principal Conductor and Artistic Advisor of the Ulster Orchestra and then appointed Conductor Laureate, and from 2002–2005 held the position of Principal Guest Conductor of the Russian State Orchestra. From 2006–2009, he was the Artist-in-Residence at the Orquesta Sinfonica de Castilla y Leon (Spain). Sitkovetsky is the founding director of the New European Strings Chamber Orchestra (NES CO) established in 1990 which is comprised of distinguished string players from Eastern & Western Europe. Since his successful transcription of Bach’s Goldberg Variations for string trio and string orchestra, he has transcribed more than 50 works mostly for strings by Haydn, Beethoven, Brahms, Dohnanyi, Bartók, Tchaikovsky, Shostakovich, Stravinsky and Schnittke. He has been a member of ASCAP since 1985 and his transcriptions are published by Doblinger, Sikorski and Schirmer. His latest transcription commission was by the Verbier Festival for the 20th Anniversary Gala in July 2013 where it was performed by such artists as Frost, Pletniov, Wang, Trifonov, Ax, Pressler, Bashmet, Kavakos, Frang, Capucon among many others. Sitkovetsky was the Artistic Director of a number of festivals including the Korsholm Music Festival in Finland (1983-1993 and 2002), Seattle International Music Festival (1992-1997), The Silk Route of Music Festival in Baku, Azerbaijan (1999) and has worked with a diverse range of artists such as Argerich, Ashkenazy, Bashmet, Davidovich, Harrell, Kissin, Maisky, Ohlsson, Penderecki, Repin, Schnittke and Shchedrin. From 2003-2006 Sitkovetsky was a co-music director of the Festival del Sole in Cortona where his NES CO was an orchestra-in-residence and performed with such artists as Dmitri Hvorostovsky, Marcelo Alvarez, Bobby McFerrin, Evelyn Glennie, Denis Matsuev,  Sir Antonio Pappano & many others.He has an active and varied recording career with an extensive discography which includes all the major violin concerti, numerous chamber music works as well as orchestral recordings that he’s conducted. In 2010, Hänssler Classic released a boxed set of the complete Mozart Violin Sonatas with Antonio Pappano and Konstantin Lifschitz. On the Concertgebouw Live label, there was a release of Dutilleux’s L’Arbre des Songes with the Concertgebouw Orchestra and Mariss Jansons. Recently, Nimbus Alliance released a newly recorded version of the Bach’s Goldberg Variations and 15 Sinfonias for string trio to great critical acclaim.  Sitkovetsky shows a keen interest in performing contemporary repertoire – he premiered the violin concerti written for him by John Casken (1995) and Krzystof Meyer (2000) and often performs works by Dutilleux, Penderecki, Schnittke, Pärt and Rodion Shchedrin, who has written several works for Sitkovetsky both as violinist and conductor. In September 2012 he conducted the premiere of Jakov Jakoulov’s Concerto for clarinet & harp in Greensboro, NC as part of the UNCG New Music Festival & GSO Chamber Music series “Sitkovetsky & friends”. In May 2014 Sitkovetsky gave the world premiere of the violin concerto written for him by Nimrod Borenstein. The latest premiere for Dmitry’s 60th birthday is the work of Mark Engebretson for soprano, solo violin & strings which will be part of “DIMA-60!” Extravaganza held in Greensboro on Sep.28th 2014 with Julia Sitkovetsky singing the soprano part.In the last 18 months Sitkovetsky added another string of artistic accomplishments to his bow – he became a TV presenter in the program called “Visiting with Dmitry Sitkovetsky” commissioned by the Russian Kultura Channel. The first four programs went on the air in June 2014 with great public & critical acclaim: Evgeny Kissin, Barbara Hendrichs, Mischa Maisky, Bella Davidovich. The further programs will include Sir Neville Marriner, Leonidas Kavakos, Yefim Bronfman, Gary Graffman, Alexander Antonenko & Sir Antonio Pappano.   Born in Baku, Azerbaijan, Dmitry Sitkovetsky grew up in Moscow studying at the Moscow Conservatory and after his emigration in 1977, at the Juilliard School in New York. Since 1987 he has resided in London with his wife, Susan, and their daughter, Julia.  Follow him on Facebook and on Twitter: dimasitko.