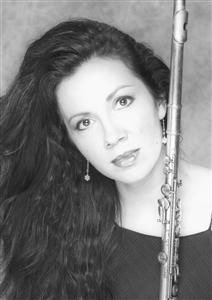 Hailed for her breathtaking technical skill, intoxicating musicality and deep interpretational understanding, flutist Debra Reuter-Pivetta enjoys a diverse career as soloist, chamber artist, orchestral player, and teacher.  A winner in the 1999 Concert Artists Guild Competition, she was the first ever recipient of the Community Concerts Performance Prize.  Her other honors include top prizes in numerous competitions including the Louise D. McMahon International Music Competition, the National Flute Association’s Young Artist Competition and the Flute Talk Competition.

Ms. Reuter-Pivetta has performed as concerto soloist with many orchestras including the International Music Program Orchestra on a tour of Italy, Switzerland and Germany, the Western Piedmont Symphony Orchestra, the Lawton (OK) Philharmonic, the Winston-Salem Symphony and the Greensboro Symphony Orchestra. Debra Reuter-Pivetta is a member of the newly formed flute, viola and harp trio, the Fire Pink Trio. Dedicated to the performance of contemporary music and rarely heard works, Ms. Reuter-Pivetta has given many premieres both as soloist and chamber artist. She gave the North Carolina premiere of Gabriela Frank’s Sueños de Chambi in 2009; and in 2008, she gave the world premiere of a piece for flute, bass trombone and electronic sounds by Dr. Thomas Clark. Other premieres include chamber works by Margaret Vardell Sandresky, Robert Dick and Lawrence Dillon.

Debra Reuter-Pivetta has recorded works by Böhm, Bozza, Saint-Saëns, Guiot and Burton with her husband, pianist Federico Pivetta.  Their critically acclaimed CD is entitled “Passion and Romance”, and has aired frequently on public radio stations across the country. American Record Guide says, “they play beautifully together.”  The couple performs extensively together. Recent highlights for the Pivetta Duo include the Dame Myra Hess Concert Series in Chicago, Community Concerts showcases in New York City and Charlotte, recitals in northern Italy and an extensive concert tour performing in 75 cities nationwide.

Debra Reuter-Pivetta is the principal flutist with the Greensboro Symphony Orchestra and the flute instructor at Salem College.   Ms. Reuter-Pivetta is a graduate of the North Carolina School of the Arts where she studied with Philip Dunigan.