The roots of the Greensboro Symphony Orchestra (GSO) extend back to the 1920’s when a group of musicians at Woman’s College (now UNCG) banded together under the direction of Henry Fuchs. In 1939, the Dean of Music at the Woman’s College, H. Hugh Altvater, formally organized the group as the Greensboro Orchestra, which was financially sustained by the College. In 1951, when Concertmaster George Dickieson, head of the Woman’s College Violin Department, became the conductor, the orchestra began to gain considerable community support and became a member of the American Symphony Orchestra League. An advisory committee was formed to further the development of the orchestra which later became independent of the University. The Greensboro Symphony Society became an independent organization and eventually assumed total financial responsibility for the Orchestra. In 1959, the Greensboro Symphony Society was created with the goals of promoting and fostering musical culture and education in the community. Under the leadership of Miles Wolff, the first president of the Symphony Society and editor of the Greensboro Daily News & Record, the Society was incorporated as a nonprofit organization in 1959. In 1963, Thomas Cousins was appointed conductor. The Orchestra’s steady growth, coupled with its image in the community, prompted the Society’s decision to assume responsibility for part of the conductor’s salary. In 1964, Miles Wolff led the development of the Greensboro Symphony Guild to aid the Greensboro Symphony Society in the promotion of an orchestra in the community. The Junior League was enlisted to help organize this community-based guild comprised of dedicated women. In 1967, Sheldon Morgenstern became the first conductor whose salary was fully paid by the Society. In 1975, Dr. Peter Paul Fuchs became Music Director/Conductor. At the conclusion of the 1986/1987 season, Maestro Fuchs was honored with the title of Conductor Laureate. Paul Anthony McRae joined the Orchestra as its Music Director in June of 1987 and led the Orchestra for more than eight seasons. Stuart Malina, a graduate of Harvard University, Yale School of Music and the Curtis Institute of Music, became the Symphony’s sixth Music Director in May of 1996. Upon his departure in 2003, the Greensboro Symphony appointed world-renowned violinist Dmitry Sitkovetsky, as it seventh Music Director.

The Symphony’s educational programs, supported by the N.C. Arts Council and the Greensboro Symphony Guild, serve more than 50,000 students every season. The Music in the Middle and the Elementary Student programs were designed to correlate with the appropriate grade curriculum. Adult Education Program included Music at Midday (a music appreciation series held in January and February at area retirement communities); Concert Preludes (pre-concert lectures by guest speakers, open to all classical concert-goers); and Postludes, an after-concert conversation with the Music Director and guest artists. 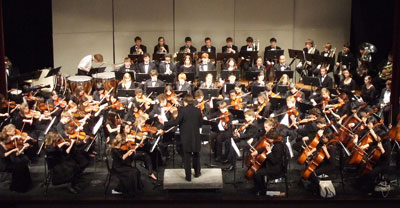 In its 38th season, the Greensboro Symphony Youth Orchestra (GSYO) performed three formal concerts and held a concerto competition that awarded a solo performance opportunity with the gsyo to three exceptionally talented students. Tuition, private lesson and summer study scholarships were awarded to 30 students. The gsyo made its first CD in 2001 and has also had the honor of giving a concert at the Kennedy Center for Performing Arts in Washington, D.C. The Greensboro Symphony Youth Strings enjoyed continued growth during 2005/2006 and presented two concerts at the Recital Hall at the uncg School of Music building. It provides an opportunity for young musicians to participate in a fun and educational ensemble setting with their peers. A new program offering young elementary students the opportunity to play in a group setting, Allegro Strings, debuted during the 2005/2006 season. The Lillian Rauch Instrument Loan and Music Scholar program continued to ﬂourish, and the program grew from 15 to 18 students who study bass, cello, violin, viola, and piano with professional musicians from the Greensboro Symphony. The program is held at Hampton Elementary School, and students are loaned a string instrument and provided 30 annual private lessons. Beginning Strings classes were held at Hampton and Jones elementary schools for 2nd and 3rd grade students who are interested in learning a stringed instrument. Those students who choose to continue will eventually be eligible to participate in the Instrument Loan and Music Scholar Program, the Youth Strings, and even the GSYO.

The Greensboro Symphony Endowment Fund was started in 1986 when the Symphony Guild contributed $50,000 toward endowing the $250,000 Concertmaster’s Chair. The endowment of the Chair was completed in 1995, and Guild member Kay Edwards and Maurice Jennings launched a successful campaign which accomplished the $1 million mark in the Fund. The Guild supports the endowment each year. The fund surpassed $2.5 Million during the 2001-2002 season. The Endowment has been under the leadership of Guild member Caroline M. Lee for many years. Led by Barbara Cone, a special initiative was undertaken by Endowment donors who contributed additional funds in honor of Caroline Lee’s dedication to the gso endowment. The Associate Concertmaster’s Chair has been endowed in her name.